Future of AAP - letter to volunteers

Hi, our quest for alternate politics is over.

Like in 1977, the leaders have once again betrayed the aspirations because of unbridled political ambition. Time to go back to whatever we were doing, feeling sad and violated. AAP may survive and maybe win somewhere and after some years, but it is already become like any another party. I realized it after the Delhi victory, many others realized later but some are still living in hopes. To all those wonderful, well-meaning and patriotic volunteers – its time to read the writings on the wall.

The feeling on the streets of Delhi is of palpable anger against AAP. Talk to any rickshaw, taxi driver or hawker, who were the main voter base and they are ready to physically hit AAP leadership. The calculation of doing well in MCD election was based on the cocky assessment of sweeping Punjab and then riding the crest of victory again to influence the Delhi voters. Now defeat looms in MCD.

There is no leadership nor support in Gujarat except on the Social Media. Gujarat will be another Goa. Goa was a small state, and after internal survey of 45% votes (another standard AAP trick), to lose deposit in 39 constituencies will be replicated in Gujarat. If they take any other state for fighting elections, the result will be similar. A small discredited coterie from Delhi cannot just descend and win elections. I have never seen that happen. Probably AAP may not fight Gujarat.

The only chance that AAP has now is to govern Delhi well, and forget fighting elections in other states. Stop the self-defeating hype and get down to do some REAL governance. Improving some schools and making mohalla clinics is not adequate governance, running a good administration is much, much more. Maybe, just maybe, after 3 years, they might get re-elected in Delhi and then AAP could probably offer a more efficient government – but that too looks far-fetched.

23 of the 67 MLAs of AAP have come from other parties, steeped in corruption. Most MLAs of Delhi have started corrupt practices. Ask any one on Delhi streets that are filled with AAP posters made of multiple faces, and they will tell you that AAP MLAs and workers have become as corrupt as earlier MLAs, if not more. Many files of AAP MLA and government corruption are with CBI and IT. The screws are going to be tightened. The CAG whom we used to quote to discredit other parties is passing strictures against AAP. Yet, we justify by pointing fingers at others.

There is a small group of people who run AAP and till now their focus was on other states and making Arvind the PM in 2019. They may restructure their goals, maybe do some drama of apology, but all that has been done before and might not be effective any more. Because of their insecurities and desire for control, they will not allow independent thinkers in decision making. Intellectuals and good people have grown antipathy towards AAP because of their cheap language and political up-manship. A party that came to change the political culture has vitiated it. So, improving the decision makers and the process seems difficult.

So, let me make my final points.

·         Some volunteers say that to stay in politics, one needs to COMPROMISE. But, AAP won 28 seats in Delhi without compromising. AAP won 67/3 by not compromising except in some seat distribution. We demonstrated that elections could be won without money, muscle and divisive agenda. The compromises started AFTER victory.

·         THEN, we started caste and communal politics. Like people, principles were also discarded. Seats were sold in Punjab, cash was taken in large doses, donation list was removed, no income-expenditure data was given for last 3 years and so on and so forth. Do you want to give your life for THIS? So, that some people can use-and –throw volunteers to fuel their ambition for power and money?

I have learnt a lot from my movement and political journey. I had quit my high paying job, but it was compensated with the knowledge and insights that I gained. I have neither become cynical nor bitter. As a person who had encountered similar betrayal during 1975 movement of Janata Party, I just thought that I should reach out to the wonderful volunteers – idealists, patriots and hopeful to say that it is over. We have been taken for a ride.

I am working on a nation building through rural transformation by adopting 15 villages in drought-prone Beed and doing 360 degree development (www.globalparli.org). I am personally in a good place, far away from any politics, due to the positive work that I am doing. I share your pain in my heart for being betrayed. Sometimes it is better to cut your losses.

Sorry if I have hurt any of you, that is not the purpose of this letter.

The truth is ugly and therefore your first impulse will be to impute motives to me, call me BJP stooge and attack me personally– it does not matter, it’s a normal reaction. My sole purpose is to share my views for you to take the right decision. 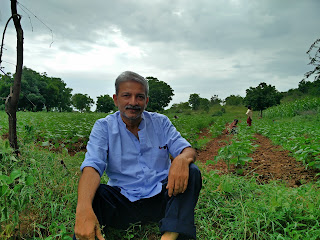