Parli gets on an average 700 mm of rains, but in the past six years, it has got around 50% deficits in four of these years. Therefore water levels have gone down tremendously. Water is never created inside the earth. It goes from the ground to the underground, filtered through various levels. This water goes and gets stored below the surface at different levels. Earth is the best underground water tank reservoir which is natural, does not evaporate and has huge unlimited capacity. And it belongs to everyone. Water below the surface has been in existence for thousands and thousands of years. Even before mankind.
But, we have stopped respecting nature, water has been taken for granted and now we are staring at scarcity of water. Water that comes from rains is allowed to flow away. 40% of the water flows away and is frittered, 30% is absorbed by plants without planning and balance goes into the ground. To reach to the water levels, farmers have been making deeper and deeper bore wells. Water store below the surface for thousands of years is now being withdrawn. Rivers, dams and canals are completely dry.
Multiple bore wells are drilled at competing depths for pulling the water from the earth’s storage without replenishing it. The richer the farmer, the deeper his bore well is drilled, so that he gets more water than his neighbors.
Now that monsoon is closing in, we need to start working at two levels
1.    Creating large storage capacity for rainwater that would last till the next monsoon.
2.    Creating conservation methods of utilizing rain water in a scientific manner so that there is never a need for tankers, ever.
For creating water storage and slowing down the water flow, the Government has an effective scheme called the Jalyukt Shivar Abhiyaan. The project involves deepening and widening of streams, construction of cement and earthen stop dams, work on nullahs and digging of farm ponds. We also are considering constructing deep Continuous Contour Trenches to stop the water flow in slopes. 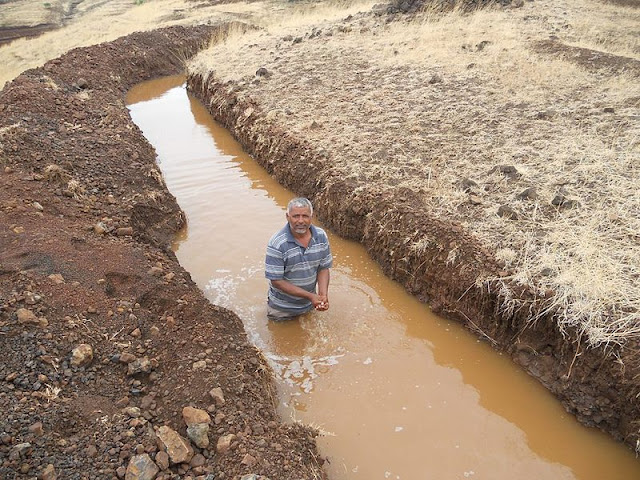 All 15 villages are making a proposal for creating this storage capacity in their areas, in rivers, nallahs and ponds and have submitted the same to the tehsildar. Work is about to begin in some of them. We are hopeful of creating adequate water storage to last till next monsoon.
For conservation, we have started working on recharging existing bore wells and wells. The public bore wells (7-10 bore wells per village) are being recharged by Fulora Foundation, while the private ones (100 bore wells per village) are being done with the help of the government. Each bore well recharge along with rain water harvesting will lead to replenishing the aquifer by 1,00,000 to 10,00,000 litres of water in this monsoon.


Water may cease to be a problem from this year in the 15 global parli villages.
Posted by mayank gandhi at 12:25 AM