I am not from BJP and in spite of that, I think the idea of a Sardar Patel statue is a monumental idea.
1.    A monument stands for an idea and in this country ravaged by caste, religion and regional differences all pulling for their own benefit – Sardar Patel, who united 562 princely states to make a united country is an inspiration and needs to be honored.

3.   Selecting the picturesque Narmada district as the location of the statue was a well-thought strategy. Remember Narmada (as per Niti Ayog) and the surrounding are the poorest districts in Gujarat with Narmada (72.45% poor), Dahod (71.75%), Dang(70.14%), Panchmahal (50.72%) housing some of the worst affected people. The forests and the poor quality of cultivable lands make agriculture income very difficult.

4.   Already Gujarat government has allocated Rs 13,278 crores (budget 16-17) for tribal development, primarily for these areas. Some of the methods of poverty alleviation suggested for these locations is setting up tourism infrastructure, incentivizing consumption of forestry products and improving prices of crops that grow better in low-productivity areas (some coarse grains or pulses for example). Spending 850 crore per year that can transform lives of 8 million people using tourism does not seem too much.

5.   The total expenditure involves the statue, a research centre for agriculture, water management and tribal development, a museum, AV gallery and conversion of the area to meet tourism traffic. A 3 star hotel, tent stay villages, high speed roads and connectivity have been already made and will help in speeding development of the region.

6.   Like the statue of Liberty or the Brazil statue of Christ or even the Vivekananda rocks – this will bring much needed exposure to tourists and start employment and businesses, reducing poverty.

While there were very smart moves made politically to upstage the Nehru dynasty and gain political mileage by appropriating Sardar Patel as a BJP leader etc, for me– making life better for the poor by using tourism money is the biggest gain.

Its not that there are no schools and colleges and hospitals in these tribal areas (I have been there personally), but livelihood source is badly needed. 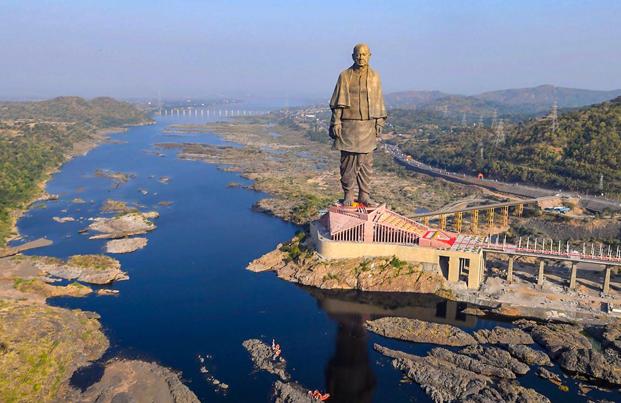 People are not opposing the statue or ideology of Patel. The main question - was it really needed at this moment? and do BJP really follow the ideology of Patel? If that's the case then we should not be seeing any regionalism by their leaders. Unfortunately, Patel is being used for political gain.
Mayank statistics you shared are impressive. I just want to add one more.
70,000 Metric Ton cement can build 3500 2BHK homes.
moreover, is a statue of unity followed MakeInIndia? then why take from China to build it? isn't that question of capabilities?

@kamble what will ppl do with 2bhks? Eat them ? Freebies never alleviate ppl from poverty livelihood does.

Mayank Ji, first removr the saffron glasses you are wearing. With that kind of budget, has the state eradicated illiteracy? Has the life style of Farmers improved? You are just talking nonsense. Gujarat has not become America yet!

Perfectly said that Sardar Patel was an ideal great man for us and we have tried to give him a true tribute.

Dear Mr. Gandhi, your write-up gives a clear sense that you feel left out by opposing the BJP in past and want to catch up with the likes of Dr. Kiran Bedi, Shazia Ilmi, Maheish Girri etc. when it comes to receiving the benefits of supporting the Government of the day.

Nothing wrong in that per se, just that, do it openly rather than stealthily.

Anyways, coming to the points you made in your blog, I would like to point out that there was a time in 1950s when Nehru actively took aid and advice of Russians and set up many Steel Plants in Tribal areas. Bhilai, where I was born and brought up, being one of the prominent examples of such an endeavour. With the setting up of Steel Plant in Bhilai, both, the locals and the migrating population not only got employment but also prospered. Such townships became prime examples of mini and thriving India.

The nearby areas, from where the raw material was to be mined and sourced, too generated employment which in turn led to prosperity of millions, help spread education better health facilities and so on. In effect, it helped in the growth of Human Development Index in these Tribal areas.

BHILAI IS A PERFECT EXAMPLE OF OF JOB CREATION AND POVERTY ELEVIATION IN A PLANNED MANNER.

Mind you, Bhilai was not an exception, there are many such examples of towns and cities like Rourkela, Neyvelli, Nangal, Chandigarh and so on which were established during that era.

Fast forward to 2018. Instead of making cities you are now making statues. I don't understand what empirical data, our Government has that suggests you can eleviate poverty and create employment by making statues in some remote and inaccessible area and then expect people to throng there. If employment generation was the underlying motive building the statute, its manufacturing would not have been outsourced to China.

The motive of building this statue are two fold. Firstly, to quench the ego of one person and secondly, try to appropriate Sardar's legacy. Remember BJP is the offshoot of the same RSS which was banned by Sardar himself.

Also, do you really believe that Sardar would have approved of such a huge largesse for himself at the cost of exchequer?

Hence, requesting you to smell some coffee and stop seeing everything with jaundiced eye.

Do you ok now the world tourism industry is bigger than the steel industry .. and the employment in the tourism generates higher income, cleaner and greener jobs, and more healthier life for the pooulapopu..
Also the steel industry was set up at these locations because the raw materials are there... When Mittal and posco tried to setup similar industry in the tribal areas of orissa, the Gandhi clan scuttled those projects wasting two decades of time spent to get approval and permission.

Your argument like
questioning why Gandhi did Dandee yatra during independence struggle...

For nation building ,need to bring People ,ignite their minds,remind their leaders vision...

If country comeout from inertia, country can fulfil their own requirements, not looking at mere govt help....
Great leaders think how to make people independent,not on state dependent